Goodman’s Geese is a diverse family run farming enterprise, located in the heart of the beautiful county of Worcestershire.  Walsgrove Farm nestles between the Abberley Hills and Woodbury Hill in the Village of Great Witley.

Family members include brothers Andrew and Michael Goodman, their parents Geoff & Judy with all the extended family helping during the busy times.

The farm extends to 500 acres, which consists of 100 acres of grassland used for the 4500 geese, 4500 Bronze turkeys & 130 longhorn cattle all of which graze free range over the pasture land.
370 acres of land is used to grow arable crops including wheat, barley, oats, beans & oil seed rape which are used for feeding to the geese turkeys & cattle. The straw is used as bedding and recycled back onto the land as fertilizer.

The aim of the family is to only sell products of the highest quality, focusing on the health & welfare of the poultry & cattle to produce the tastiest most succulent meat from animals that have been well looked after and happy

The goslings arrive on the farm annually in May /June as day olds from Norfolk Geese. They are raised indoors until about 4 weeks old when they are let outside to graze in large grassland paddocks. The geese are let out every morning at dawn & then shut up again at dusk, to protect them from the foxes that inhabit the woodlands surrounding the farm.

The geese are also fed a specially prepared ration alongside our home grown wheat which helps to produce a succulent, tender bird for the table.

All the geese are prepared on the farm ready for the oven. They are dry plucked in our on farm packhouse & hung for 7-10 days in the cold rooms to help the meat mature. They are then eviscerated and boxed with the giblets & a pack of goose fat with sage & rosemary ready for the oven.

The geese can be collected from the farm or delivered to your door. 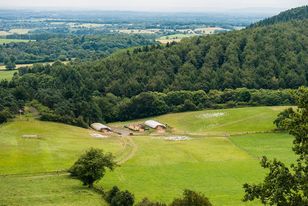